On our honeymoon (See “Oh happy day.bis"), my wife and I have been in Iceland, commonly called “Ísland” by its inhabitants. For all the impatient among you, here nothing but the numbers:

The quest of our honeymoon was to explore Iceland by car, roughly following what is called “ring-road number one”1. The connoisseur would actually object and insist, that one could never drive as far as 3'000 km on the ring-road alone. He’s right, we did lots more than driving around an island of the size of Iceland in two weeks. However, for that endeavour, you need something more robust than what is commonly offered as an entry-level compact-car to Iceland. Hence we choose a Ŝkoda Octavia 4x4, 2.0. With this car, you are still not permitted to drive on the F-Roads into the wild and mighty Highlands, but you can load it with all the food you brought from abroad that should save your vacation budget and still give you a living. 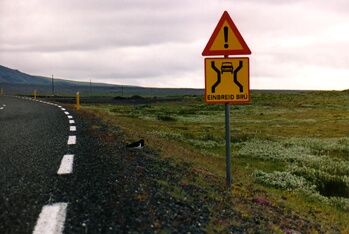 During our journey, we realized that choosing this car was a good thing. First, we met some people from Germany with a smaller car but more weight that got K.O.‘ed by a stone on the ground. Second, we met some people that had one of these compact-cars that admitted they barely drove more than 20km/h, while our brave Škoda cruised with comfortable 60-80km/h over the “road”.

Roads in Iceland are barely worth their name. Their state goes from bad to worse most of the time, only a few of the roads are covered with tarmac, and during our journey, we experienced about 2/3 of gravel roads, mostly covered with potholes that were often filled with water… We survived. And so did our brave car.

Readers of this blog, beware, especially if you come from Iceland. I don’t compare Icelanders to their birds, sheep or horses. This is a matter of convenience only. This said I want to share a few insights about these four subjects.

People are very few in Iceland. Moreover, they tend to form flocks, commonly known as cities. The biggest, as you may know, is the Icelander’s capital “Reykjavik"2, followed by “Akureyri”. Reykjavik is home of more than half of Iceland’s complete population, the latter counting a rough 300'00 individuals. Both cities are very lively, full of art, culture … and tourists.

Actually, we’ve been in a place called “Reykjalihd”, near lake “Myvatn”, where a bare 320 inhabitants are facing an average of 100'000 tourists a year. It seems that big cruise ships like the “Maxim Gorky” often deploy loads of tourists that visit Myvatn area. But this is not my point. Just be forewarned: Icelanders will never be a threat. Icelanders are very friendly, love good design and have a strong, freedom seeking will.

The Icelanders can definitely not be called the “main inhabitants” of Iceland, despite the fact that they are the only ones that carry the name of the country. Birds, sheep and maybe even horses outnumber the Icelanders by a great deal. And some of them (birds) are very aggressive! 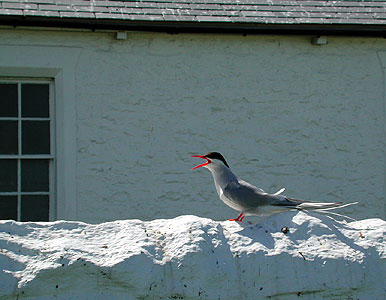 Be forewarned, you might be attacked by some mother birds when you approach their nest too close (Actually, it appears that these birds are somehow emancipated: As Bernard points out, its the mother and father birds that defend their nest). And I definitely know of what I am speaking here. (For those interested, it’s “the small white ones, with a black cap and a red beak”)3 Sheep, on the other hand, see themselves as “king of the road”. They also tend to flock, but not in cities (where you more likely will find their remainders as knit-ware). They flock on roads. So, remember. Roads are from bad to worse. Add sheep… then add the fact that sheep follow their leader… As a rule of thumb, a sheep will never cross a road alone. And in most cases, drivers will panic, brake full throttle, hit a pot-hole and crash their car with the only car coming in the opposite direction atop the next “blindhaed”. I am not fooling you. 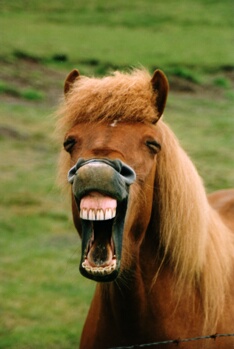 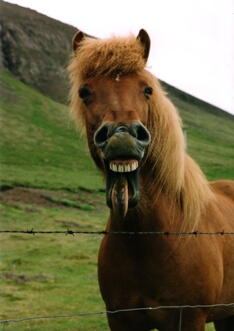 The last species we encountered a lot, were horses. They have, as you may know, 5 gaits, two more than “normal” horses. These gaits are the fetgangur, the walk or step, the brokk or trot, the tölt, which is a faster type of walk, the skeiđ or the pace and the stökk, or gallop. There is much to say about the Icelandic horse, I guess, but others ("Íshestar") are better in explaining this. However, I have to add one thing to all these characteristics, something you probably won’t find elsewhere: Icelandic horses laugh at you! Actually, my wife laughed at the horse first, and the horse laughed back; kudos to her for making these two hilarious photographs possible. Kudos to her for being the best wife ever. 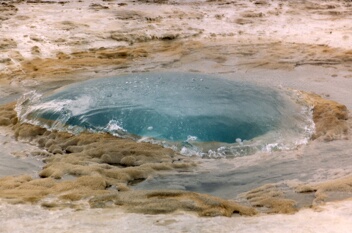 One thing everyone wants to see when in Iceland, are its Geysers. The picture on the left is Geyser “Strokkur”, fractions of a second before the “explosion” of water and steam will actually take place. One particular thing is, that you actually can see the water starting to flow over the border made of stone. It was fun to see tourists, including myself, standing around this hole, waiting for the water to eject. As with every such subject as a tourist, sociologists would be amazed to study their behaviour when it comes to getting the best viewpoint—and to hinder people to stand exactly in front of them.

Exit “music” for a vacation#

These few impressions can only give you a glimpse of what Iceland really is about. The best thing is, you visit this country4 yourself. For the lazy, I will, au fur et à mesure, publish some more impressions from this memorable vacation.

All pictures copyright (c) 2003 by caroline richard and johann richard, except where noted otherwise.