Via Angie McKaig and [Transportation Futuristics][] (Both worth a visit), I landed at the Freedom Ship project. It’s about a project to build a ship (well, barge is mor appropriate) serving as a city:

The Freedomship will be many times larger than the largest ship currently afloat. It will house 50,000 residents in 17,000 homes and employ 15,000 people.

I was wondering what the effect of the recently confirmed Rogue Waves (First reported at El Reg) on that barge would be. I am no navigation or ship construction engineer but I would expect a considerable effect on a ship of roughly 200m by 1300m width and length. 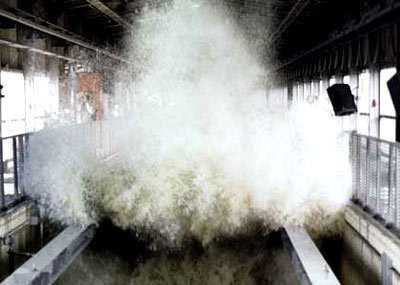 Despite its inertia, I can imagine turbulent voyages if giant waves hit the thing in a bad angle. And from the images, I would guess that the first deck that is visible on the images would not be more than 15 to 20m over sea level — exactly within the reach of these rogue waves. I wouldn’t be a resident of the Freedom City at that moment.

On a completely different note, what do you expect me to write for my 100th entry? (If you expect anything … :))

San Francisco’ers: Did any of you spot a [BART Buggie][] recently?